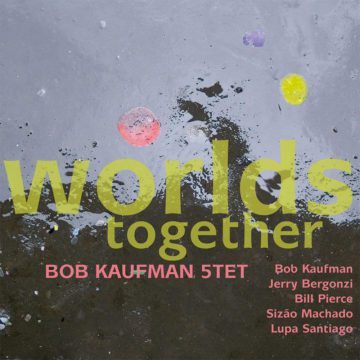 Bob Kaufman was already a great drummer in the 1960s when I first heard him and he’s been using his hands on the bandstand to change the way other musicians play their music. He has the ability to help others explore all the different corners of their musical personalities. Bob’s students at Berklee College of Music in Boston, where he is a professor of percussion, also benefit from his wide experience as a player and author of some of the finest educational material for drummers. Bob’s expertise comes from performances with some of the finest players in jazz like Bill Frisell, Mike Stern, John Abercrombie, Dave Liebman, George Garzone, Mose Allison, and many more. I love Bob’s playing. I even love the way he “tunes” his drums! He has it all.
Bob has assembled a great group for this recording. He met guitarist Lupa Santiago and bassist Sizao Machado when doing a clinic in Sao Paulo, Brazil. They hit it off immediately. Sizao’s first comment to Bob was “Wow, man! Playing with you feels like swimming deep in the ocean with the whales, man!” Sizao should know——he has played with an array of musicians from Herbie Mann and Jim Hall to Ivan Lins and Chet Baker and many other greats.
Lupa Santiago has honed his skills over the years with experiences playing with the likes of Dave Liebman, Howard Levy, Gary Willis, and many others.
Both Brazilians have great control. They can hold back and then when something is needed——Wham! They play the perfect thing required at the moment. After a few months, Lupa and Sizao came to Boston to record with Bob and the other members of this group.
Bill Pierce first gained international recognition playing with the likes of Art Blakey’s Jazz Messengers, Freddie Hubbard, Tony Williams, and many others. He also is Chairman of the Woodwind Department at Berklee and a much sought-after clinician around the globe.
Jerry Bergonzi is, of course, one of the best players, but also authors many books and videos and divides his playing time with teaching at the New England Conservatory. His clinics are very popular around the world. Also, Jerry’s compositional skills are evident here as six of the eight compositions are his.