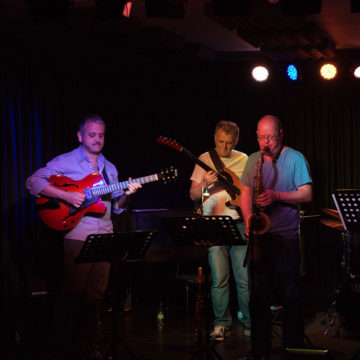 Santiago & Vestergård Quintet comes out of earlier collaborations both of them have done with the other musicians on different occasions, playing in Brazil, Sweden, Ireland, Portugal, Denmark and South Africa.

When meeting in Denmark 2013 Anders and Lupa set up the plans to make a record together and contaced the other musicians which eventually led to a week of playing and recording their music in Lisbon 2014.

All the music is written by Anders and Lupa and is characterised by strong melodies, rhythmic
creativity and dynamic interplay. Strong grooves together with improvisations that can go in any direction takes the listener on an interesting musical journey.

Lupa Santiago from Brazil is one of the most well renowed jazz guitarists in South America. He has recorded and played on numerous recordings and performed in South America, Europe, United States and South Africa.

Anders Vestergård born in Finland but living in Sweden is highly involved in the modern jazz sene in Sweden and has led, recorded and performed with several groups in Europe, Brazil, United States, Russia and South Africa.

Together with highly acclaimed musicians from Irland and Portugal they have put together a strong group of musicians. Since all of them have busy schedules the group will be performing in different constellations depending on the occasion.