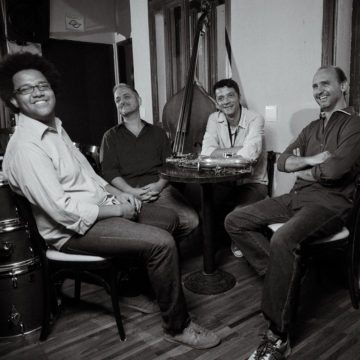 The group’s history goes back to 1997, when Lupa and Carlos started a partnership in Boston, USA. They performed extensively in the American East Coast scene in formats ranging from trios to septets, and in 2000 recorded the first album, “Images”, released in Brazil in 2001 and indicated to the Latin Grammy 2002 as “Best Latin Jazz Album”. As the duo returns to Brazil, a new quartet was put together with Vitor and Guto, and the group began to perform by the name Sinequanon. They recorded “Sinequanon” in 2003, “Telescópio” in 2005, and so far have been actively performing all over Brazil, with appearances in cities like São Paulo, Brasilia, Florianopolis, Joinville, Salvador, Aracaju, Maceió, to name a few.

“Live @Jazz nos Fundos” is the group’s newest release, recorded in August 2014 Live, catching all the energy of the band, and arriving to Brazilian audiences in June 2016. Following on the same experimental and innovative musical personality.